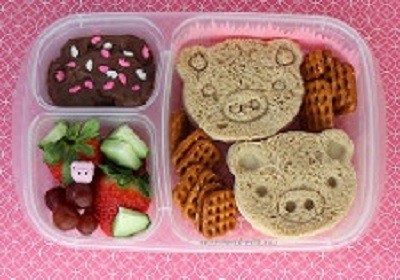 My kids usually ride the bus home, but recently I walked on school grounds to pick them up. I saw a fifth grader, who walks home, stop at the garbage can to empty out his lunch bag before walking out the school gate.

He threw away several bags of food. He threw away an entire apple. Then, he opened up a container and pitched what looked like rolled ham or turkey.

After he left, I walked up to the garbage can.

Right on top, I saw the other foods he threw away. One bag included slices of tangerine or clementines; another was three Oreos! I saw the rolled up turkey. My gosh, did he throw away his entire lunch? Did he eat anything at all?

Does he do this every single day?

It made me wonder what was happening at home. Did he get in trouble for not eating his lunch? Would he be punished or have to eat his old, warm lunch for dinner?

Nagging kids to eat their lunch

From kindergarten until fourth grade, my son would bring home his lunch bag filled with most of what I packed that morning. I would cringe at my own nagging as I questioned him about why he didn’t eat this or that.

I always wondered how long it would take before he figured out he could simply throw away his food to make it look like he ate it. But he never did. For years, he brought home this uneaten food, intact. Somehow, he would endure my weekly comments about what he wasn’t eating.

Getting kids to eat lunch

I put in Goldfish or pretzels along with some beef jerky or granola bars, just so they will eat something.

Giving kids what they will eat at lunch

When he was in fifth grade, I stopped giving my son the sliced apples, carrots and other foods he wouldn’t eat. I packed his favorite foods, including hot dogs, and healthy snacks he would eat. We were both happier.

I learned this lesson finally, when I learned my second born, as a first grader, was throwing away her food. All that time I thought I had the perfect eater!

I was so proud: I had a child who would eat anything and practically everything I ever gave her for lunch! But I was wrong.

I found out from one of her friends that “Missy” was throwing away her sandwich every day.

Later that evening, I sat down with her to discuss what she would and wouldn’t eat at lunch. I explained to her how we didn’t want to waste food and how we could come up with healthy foods she would want to eat.

Each day, she brings the lunch bag home, usually empty. I continue to *think* it’s going fine but who really knows, right?

My children have NEVER purchased anything from the cafeteria/lunchroom… ever. Not even an ice cream, a bag of chips or a milk.

They’ve had a variety of choices but they always want to bring a lunch from home. They are now in third and seventh grades, and I’ve never even put one dollar on their school lunch accounts.

Our school is K – 8th. They changed their lunch and recess times so that now their recess comes first and then lunch. This arrangement works much better for my children because they’re not taking a few bites of food and then packing up so they can be among the first to line up for recess.

Now, they will actually eat because they have to sit there for the full 26 minutes. And maybe they’re even a little hungrier because they’ve been running around right before lunch.

Kids throwing away their lunches before they get home

We want our kids to eat lunch so they can do their best in school without being a distraction to their teachers and peers. While many kids buy a school lunch, there are many kids who bring their own lunches.

Getting kids to eat lunch is always a balance between what they want to eat and what you want them to eat. Find out their favorites and avoid being the nag.

We don’t want to start bribing and rewarding them for doing what they are supposed to be doing.

Kids learn to tell you what you want to hear

In the grand scheme of things, getting kids to eat lunch at school is a minor thing.

Yet, seeing that boy throw away his lunch was a great lesson. It reminded me to limit harping on my kids as they get older.

At some point, the kids will figure out a way to get around your rules. We can’t be everywhere at all times. They need to figure stuff out on their own.

We don’t want to be those helicopter parents where our kids can’t do anything without us knowing about it.

But it made me realize and remember to not nag so much. And to pack some foods they like to eat….